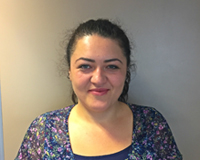 Biltekin has received her Ph.D. from the Department of International Relations at Bilkent University in 2014. In her dissertation, she put forward a homegrown theorizing proposal based on her empirical findings derived from an event dataset that she built. The dataset comprises of 22 years of Turkey’s foreign and domestic behaviour by Turkey’s state and non-state actors. Before joining our center, Biltekin worked as a research assitant in Katip Çelebi University in İzmir. She also has taught Turkish foreign policy classes at the undergraduate level at Bilkent University IR department. Her reserach interests include Turkish foreign affairs, International Relations theory, Civil-Military Relations, Homegrown Theorizing and Quantitative Methods in Soıcial Sciences. She has been published in journals such as All Azimuth and New Perspectives on Turkey, and has a chapter titled “Homegrown Theorizing and Non-Western International Relations Theory” in the recently edited volume International Relations Theories (2014).