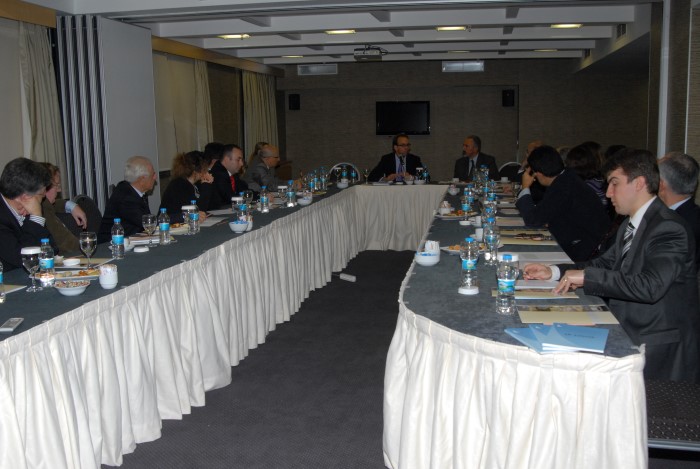 WHAT DIPLOMACY CAN DO: THE CASE OF THE NUCLEAR NON-PROLIFERATION REGIME

Focusing on the issue of the nuclear non-proliferation regime, a system that is governed by states, groupings of states (nuclear suppliers, non-aligned movement, P5), international organizations (e.g. IAEA, CTBTO) and NGOs, Prof. Dr. Kornprobst spoke about how diplomacy can produce a new governance over nuclear non-proliferation. He puts his study to the test by inquiring into communicative exchanges on the grand compromise on which nuclear non-proliferation governance is based. These communicative exchanges range from close communication, which could be antagonistic and declaratory, to open communication, which includes compromising and transformative communication. While threatening, ostracizing, defensive and elaborative statements of actors are considered as antagonistic and declaratory, placating accommodating, argumentative and dialogical statements are considered elements of compromising and transformative communication. Thus, rhetorical strategies that actors employ constitute the backbone of this study.

By examining the statements of the most vocal actors among the nuclear powers and of the non-aligned movement prior, during and immediately after the Nuclear Proliferation Treaty Review Conferences, Dr. Kornprobst highlighted three periods. The first was a period of very little transformative communication. The second period was one predominated by declaratory communication. While the non-aligned movement frequently engaged in elaboration during this period, the nuclear states replied with defensive strategies such as denial and inattentiveness–a strategy that is not verbalized yet ignores any accusations. Lastly, he noted how, in the 2000 and 2010 Review Conferences, all parties moved from declaration to compromise, when they felt that the entire non-proliferation governance system was at risk. In these de-escalation periods, one party’s strategy was elaboration, while the other party moved toward placation. Hence, these periods demonstrate that the governance of non-proliferation is adopting milder and more open rhetorical strategies in which diplomatic communication matters.

As Prof. Dr. Kornprobst concluded, since the end of the Cold War, the non-proliferation regime has become more controversial with the rise of new challenges. However, since compromise agreements are never carved into stone, the regime continues to recondition itself and reform the governance system to adjust to changing external factors.