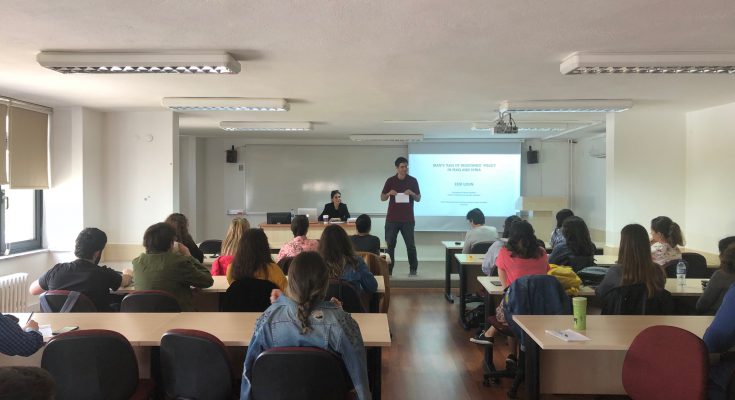 On April 11, the Center for Foreign Policy and Peace Research hosted a PeaceTalk: Young Scholar Series seminar at Bilkent University. Our guest speaker, Ezgi Uzun, Ph.D. candidate in Political Science at Sabanci University, made a presentation entitled “`Iran’s Axis of Resistance Policy and Its Regional Implications”:

“While scholars of Iran’s foreign policy interpret the nuclear deal as a general move towards pragmatism under Rouhani Administration, the strong ideological tenets of Iran’s political and military engagement in the Middle East in synchrony with the nuclear deal is predominantly underscored. This research thus seeks to understand the ideological and institutional pillars of the Axis of Resistance as an Iran-led alliance system in the Middle East. The first part of the research will examine the discourses Iran uses for the recent political transformations in the region. The second part will analyze how these discourses are translated into policy strategies towards the Middle East after the Iraq War of 2003, the Syrian civil war of 2011, and the rise of ISIL in 2014. The institutional transformations of the political and military systems in Iraq and Syria will be the focus of this section, where the Iranian role in supporting Shia militias across Iraq and Syria as well as in developing popular mobilization institutions such as ‘the Hashd al-Shaabi’ in Iraq will be analyzed. This study shows that ‘religion’ is a power shaping the transnational politics of the Middle East. The discursive and organizational institutionalization of ‘religion’ in foreign policy has the capacity to challenge the transnational order with extensive ideological, political, and military networks they create. This research is based on the observations, interviews, and data retrieved from English and Persian sources during the researcher’s field trips conducted in summer 2015 and 2016.” All Azimuth at the ISA Annual Convention  Workshop: Strategy Studies in Turkey