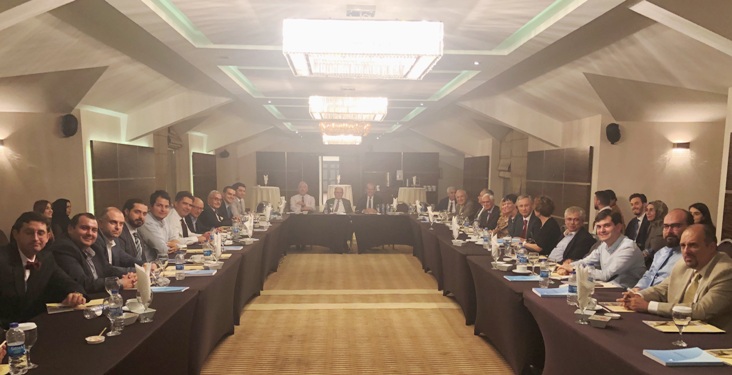 BISSS – Amb. (R.) Namık TAN, Former Ambassador of the Republic of Turkey to the U.S.

On October 17, 2019, Ambassador (R.) Namık TAN, former Ambassador of the Republic of Turkey to the United States, addressed a Bilkent International Security and Strategy Seminar (BISSS) at the Bilkent Hotel.

In his presentation entitled “Turkey and U.S.: The Disgruntled Allies,” Amb. Tan provided an overview of where the two countries’ relationship stands today and where it is going. Amb. Tan, started his talk with an overview of how an historical transformation of Turkey-U.S. relations is heading towards a breaking point. He focused on how Turkish-U.S. relations have swung and been shaped between mutual trust and mistrust, and has evolved into a volatile and unpredictable relationship. He further pointed out the problems, including internal power struggles in domestic politics, the PKK and Kurdish issue, and the lack of a commitment for a larger strategy regarding Syria, that have led to an essential loss of trust.

Amb. Tan concluded his talk by stating that the relationship is sensitive, and raised his concerns regarding why and how Turkey and the U.S. should immediately seek to increase their mutual trust. Most notably, he argued, the two countries should engage at all institutional levels by distancing themselves from domestic politics.

The roundtable concluded with a Q&A session, in which participants discussed further what both the U.S. and Turkey could do to continue as strategic partners or allies, as well as what opportunities have been missed and how to compensate for them.