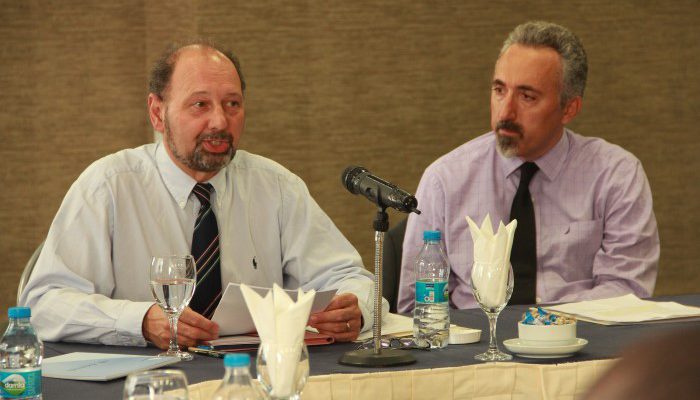 On May 21, 2013, Dr. Richard Sakwa, Professor of Russian and European Politics at the University of Kent and Associate Fellow of the Russia and Eurasia Programme at the Royal Institute of International Affairs, Chatham House, addressed a Bilkent International Security and Strategy Seminar (BISSS) at the Bilkent Hotel.

In his talk titled “Towards a Greater Europe: Axiological Versus Dialogical Politics,” Prof. Sakwa focused on how European politics has taken on an axiological character in the post-Cold War era considering Russia’s relations with the EU and the West in particular. He claimed that although the fall of the Berlin Wall opened up an opportunity for dialogical politics, it did not meet the expectations for a reunited European political community since new forms of axiological politics have been imposed.

Prof. Sakwa defines dialogical politics as a process that transcends the logic of incommensurable duality between parties of similar status. On the other hand, his explanation of axiological politics is a categorical, monological, and ideological form of politics that denigrates political subjectivity of actors, not only between states but also between state and society within a state. For an example, he explained how the EU set itself up as the teacher to others and a series of mimetic relationships has begun. Prof. Sakwa then went on to explain the key features of axiological politics, focusing primarily on the mimetic politics which lies at its heart.

One type of mimetic politics Prof. Sakwa mentioned is mimetic violence, which is based on scapegoating –a way of relieving an internal tension by directing the violence to an external political actor. The post-Cold War era is full of examples that demonstrate how the West and Russia have responded to each other with their own forms of mimetic violence. A second type is called adaptive mimesis, of which Russia has a permanent fear. In that type of politics, autonomous political subjectivity is diminished by engagement in reform and normative standards that set outside one’s own experience. With respect to this definition, Russia appears to be refusing Western modernity, since modernity and protecting its authentic identity are not mutually exclusive for Russia.

After presenting examples of axiological practices between Russia and Europe, Prof. Sakwa concluded his speech saying that it is still possible to put forward a process to establish an international dialogical community by recognizing political equality and permanent open-ended interactions. This can help de-escalate axiological politics and overcome post-Cold War politics.