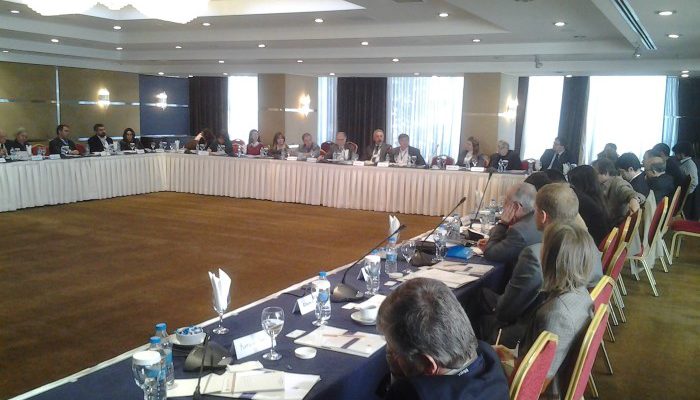 On November 19, 2013, the Centre for Foreign Policy and Peace Research (FPPR) hosted a workshop entitled “Enduring Convergence Possibilities between U.S. and Turkish Foreign Policies Towards the ‘New’ Middle East.” The workshop brought together Turkish and American experts to explore and discuss commonalities and differences in the two countries’ approaches to the Middle East.

The workshop, which was convened by the FPPR and funded by the German Marshall Fund of the United States (GMF), took place at the Bilkent Hotel, Ankara. After introductory remarks by Dr. Özgür Özdamar, Bilkent University, Prof.Dr. Ali Karaosmanoğlu, Director of the FPPR, welcomed the participants to the workshop.

During the first panel, chaired by Prof. Karaosmanoğlu, guest speakers presented a discussion on how current political turmoil in the Middle East has affected Turkish and US foreign policies towards the region. Speakers highlighted that miscalculations about the course of events, the projected end result of the conflicts, and broader national interests, played a significant role in the foreign policy initiatives of both countries.

The second panel, moderated by Mr. Özgür Ünlühisarcıklı, Ankara Office Director of the GMF, paved the way for a more specific discussion touching on the points of divergence and areas of cooperation before and after the Arab Spring. Speakers specified ups and downs in Turkish-US relationship and divergences in policy goals in the region and presented their ideas about the implications of those for determining the type of partnership that exists between the two countries, both in rhetoric and in reality.

At the end of the day, participants concluded the seminar with a brainstorming roundtable session, which raised questions of how converging the common interests of Turkey and the United States–a balance of freedom and security with democratic values– could be formulated to further a real strategy agreed upon by both sides, and ultimately help lead to greater stability in the region.

Dr. John Packer, Professor of Law and Constitutions, University of Ottawa  Seminar on Turkish and Norwegian Approaches to Mediation - November 6, 2013