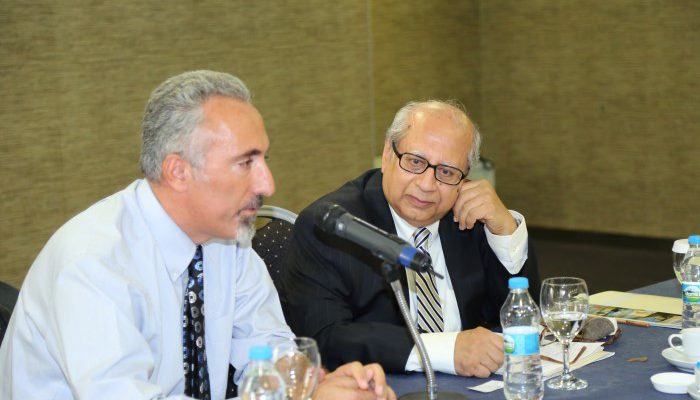 TOWARD ARMAGEDDON? STATE FAILURE, SETTLER COLONIALISM, AND PROXY WARS IN THE MIDDLE EAST

Dr. Ayoob’s talk focused on his newly published book Will the Middle East Implode?, in which he postulates that rapidly occurring changes in the region, including the civil war in Syria, the rise of jihadist groups, the invasions of Gaza, and the military coup in Egypt will drive the already volatile Middle East towards a series of interconnected crises or even a major implosion.

By examining sectarian warfare, terrorism, uprisings and other conflicts and crises that can be observed in the region today, Dr. Ayoob’s talk highlighted these as the products of five fundamental factors. The first factor is state failure in the Arab World. Dr Ayoob argues that borders drawn by imperial powers, primarily Britain and France, at the end of World War I, did not leave enough time for political processes to develop, and in the resulting divisions we can find explanations for the current conflicts of the region. Second is the phenomenon of proxy war, which explains how rivalries among regional actors led to the emergence of groups such as ISIS. Third is the failure of two models of governance: 1) the model of strangers and 2) the model of ancestors, essentially describing the unnecessarily dualistic understanding that governance must either be modeled on those from abroad or should entail a reversal to ancient local principles. The fourth factor is the settler colonialism that continues with Israel’s guiding principle of “occupy the land”. Last of all, the strategic importance of oil and gas was noted as having had a significant impact on the development of this region as well as on the involvement of external actors.

In his final remarks, Dr. Ayoob touched upon the relations between Iran and Turkey and its significance for the security structure of the region. In this respect, for Dr. Ayoob, the lesson to be learned from history is not that the two are enemies, but that their enmities provide opportunities for external powers to intervene in the politics of each, and should therefore be kept minimal.