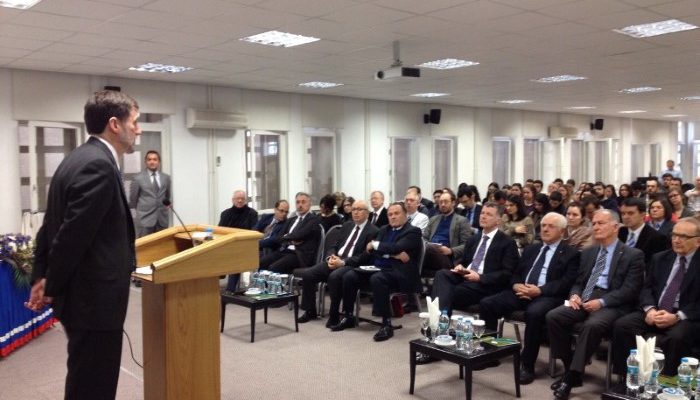 Prof. Doyle spoke on the subject of his most recent book, “The Question of Intervention: John Stuart Mill and the Responsibility to Protect”. In his talk, he explained how he was returning to basics to deal with the question of military intervention, by drawing on John Stuart Mill’s famous essay, “A Few Words on Non-Intervention,” to explain when it is permissible to intervene in the politics of another country, while also evaluating its modern version, the doctrine of the Responsibility to Protect.

Prof. Doyle first made clear three broad ethical concerns that we all share in addition to our common commitment to the rule of law: humanitarian protection; national self-determination; and national security. He further gave details about how these concerns are fundamental when responding to the question of when a state’s sovereignty should be respected. After noting Mill’s predictions that interventions most often would lead to increased civil unrest, continued authoritarianism, or imperialism, Prof. Doyle explained that he had examined a detailed historical record of the results of actual interventions since the late 19th century, and those largely seemed to confirm Mill’s intuitions.

There are three puzzles that Prof. Doyle considered as themes of his book. First, the idea of non-intervention is itself controversial. Is it not contradictory that Mill be committed to non-interventionism, though he is a liberal? The second puzzle involves the question of why a government should override the norm of non-intervention, and the third evolves around the issue of when to disregard it. Accordingly, Prof. Doyle presented the circumstances that justify intervention for the second and third cases by giving examples both from Mill’s work and from contemporary history.

Finally, Prof. Doyle argued that Mill’s essay, though limited in some places by unpersuasive arguments, remains a great resource for ethical and legal discussions on intervention. Building on Mill’s argument that even a well-meaning intervention may likely produce more harm than good; Prof. Doyle concluded by outlining three pillars necessary to revive the UN doctrine of Responsibility to Protect: strategic circumstances, right accountability, and firm commitment.