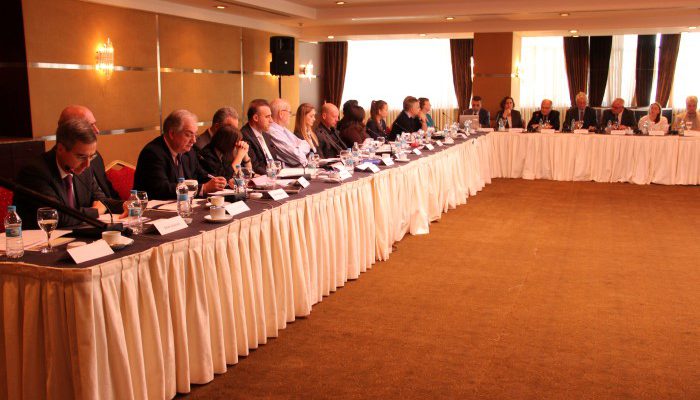 Seminar on Turkish and Norwegian Approaches to the Arab Uprising – November 1-2, 2012

On November 1-2, 2012, the Norwegian Peacebuilding Resource Centre (NOREF) and the Centre for Foreign Policy and Peace Research (FPPR) organized a seminar bringing together members of the Norwegian and Turkish research communities to discuss the two countries’ approaches to the Arab Uprising  together with researchers from several Arab countries.

Opening remarks by Prof. Dr. Metin Heper, Provost of Bilkent University, Ambassador Şafak Göktürk, Director of Policy Planning in the Turkish MFA, Ambassador Janis Kanavin, Norwegian Ambassador to Turkey, and Mariano Aguirre, Director of NOREF both emphasized cooperation between Norway and Turkey despite their different points of view and experiences, and also supported the idea of dialogue with all parties in the region in order to achieve peace and democratic transition.

The first day of the seminar gave policymakers and scholars the opportunity to share their views on the region since both countries are involved with mediation practices. Turkish representatives emphasized the strategic importance of a balance between peace and security in the region, while the Norwegian participants highlighted the significance of peace building and economic development. In light of their respective foreign policy principles, they discussed how to approach post-conflict peacebuilding in the region and respond to the challenges confronted during the reconciliation process. In this respect, since each country has its own limits and advantages, coordination and complementarity of mediators at the international level were presented as a considerable factor in peace processes. The participating researchers concluded the first day with a discussion on the legitimacy of international actors and to what extent a certain social and political model could be applied to these countries in order to bring peace, security, development and transitional justice.

On the second day, participants discussed more specific issues such as the effects of violence and its implications for a post-conflict society. Since the use of different forms of violence leads to an existential fear of isolation of groups based on religious, ethnic, and sectarian divisions, rebuilding a new system is expected to be challenging during structural transformation. A strong civil society, promoting equal rights for citizens, protecting and ensuring the continuity of the critical infrastructure and economic resources, and reform in the security sector play crucial roles in the post-conflict stage. Moreover, the relationship between religion and the state and also civil-military relations with special reference to the Turkish experience were also examined with the intention of understanding how Islam and democratic transition can be reconciled under the rulings of Sharia, as in the case of Egypt, and what lessons Arab countries can take from the Turkish experience in terms of insuring the success of the transformation. Finally, participant researchers concluded the seminar with a fruitful brainstorming session which raised the prospects of new research initiatives and determined practical steps to be taken to further peace and reconciliation in the region in the new era characterized by the Arab Spring.