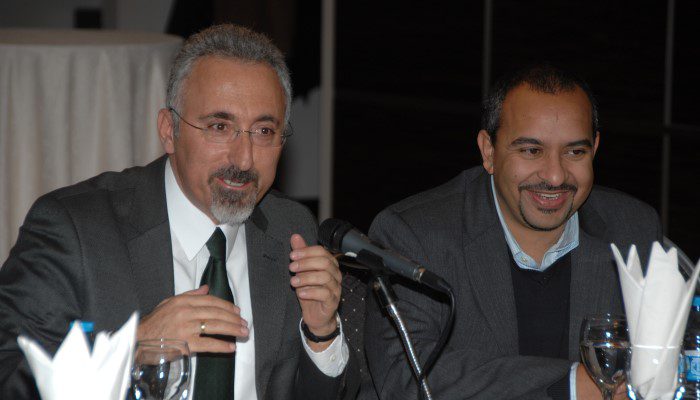 Of Streets and Tweets: Media and the Arab Revolutions

On February 15, 2012, Mr. Adel Iskandar, Center for Contemporary Arab Studies at Georgetown University, addressed a Bilkent International Security and Strategy Seminar (BISSS) at the Bilkent Hotel. In his talk, titled “Of Streets and Tweets: Media and the Arab Revolutions”, Mr. Iskandar touched upon three dimensions of the uprisings in the Arab world, focusing primarily on the Egyptian protest movements.

Mr. Iskandar, began his commentary by looking at the resurgence of authoritarianism, a phenomenon which, he noted, is highly associated with the Middle East. He explained how the countries in this region consist of different political entities, and argued that fractures within the political regimes have emerged over the past few years due to two main problems, the first being the deeply entrenched economic crises and inequalities, the second being states’ inability to create avenues for effective political representation, a problem most often resulting from paranoia over identity politics. Furthermore, he claimed, only an illusion of democratic states is being created by the authoritarian regimes, yet in fact, this practice ultimately leads to complete collapse of the state.

Mr. Iskandar went on to address the issue of the relative successes and failures of Arab protesters in the streets. He argued that although the protests have been comprised of diverse religious traditions and political affiliations, one common point, and, indeed, the prime characteristic of the protesters across the region has been their “desire for dignity” at the risk of their lives. However, “fear of the uncertain” and the belief that revolutions are detrimental may help to explain why some states have still been able to convince the majority of their publics to side against the revolution movements.

Finally, Mr. Iskandar discussed the role and impact of the media in these protest movements, and looked at how the media in the region has metamorphosed since the uprisings began. He emphasized that private satellite channels have greatly influenced and encouraged the masses to topple the existing regimes. As for the role of social media, he argued that they were somewhere in the middle on a scale of least to most influential components overall in these revolutions, having started a chain of reactions and carved out a space for protesters. While the official state media have not yet reformed, states have begun to learn how to utilize social media and reconstitute their authority.

Mr. Iskandar’s trip to Turkey was sponsored by the Embassy of Canada. H.E. John Holmes, the Canadian Ambassador to Turkey, also attended to this seminar.