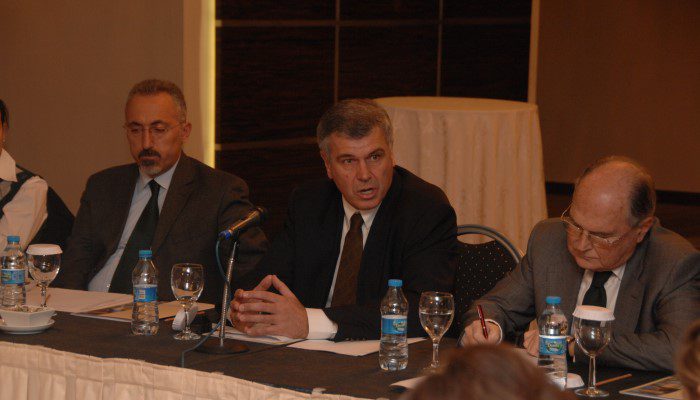 On December 6, 2011, Prof. Dr. Ludger Kühnhardt, Director of the Center for European Studies at Bonn University addressed a Bilkent International Security and Strategy Seminar (BISSS) at the Bilkent Hotel.

Prof.Kühnhardt, referring to the current “Euro Crisis”, focused on how the EU positions itself in the globalizing world of the ‘post-post-Cold War era’. As neither the Lisbon Treaty nor the European Constitution has proven capable of paving the way for political union or institutional integrity, Europeans, with this fiscal crisis, are becoming increasingly aware that Europe is at a crossroads: It may become either a peripheral structure or a federation.

For Prof. Kühnhardt, since the beginning of the EU, it has endless series of crises in integration which are different from crises of integration. To determine whether the debt crisis is yet another crisis in integration, he introduced the idea of crisis as an engine of progress in European integration and challenge and response as one explicatory variable. He indicated that at the root of the current crisis are 1) the absence of a fiscal union and 2) national policy failures, to be named as ‘sovereign debt crises’. However, beyond fiscal solutions, he suggested that in the long term a sense of potential reengineering of economic growth and development are important as much as a European federation in order to make all European structures functional.

Discussing the debt crisis, Prof. Kühnhardt described three dimensions of responses: debt relief, continuity of crisis management, and moving beyond the technicalities of crisis management. The last of these, he emphasized as the focus of the discussion, is significant to explain how to structure mechanisms in Europe in order to further facilitate a political union. Considering the variety of local political actors and their reflections in the media, the biggest challenge will be to find elements of society operating as a political “European society”.

Lastly, as for Turkey’s membership process to the EU, Prof. Kühnhardt noted that when both sides discussed this issue, they discussed it within the framework of “Turkey and EU relations”. However, he suggested that there should be more discussion about possible scenarios of “Europe with Turkey” or “Turkey in Europe”.